A more capable, nuclear-armed, North Korea will pose very substantial challenges to the U. 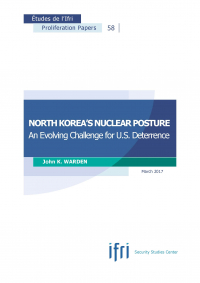 While North Korea’s nuclear program already serves multiple functions in its security strategy, it is likely to acquire an even greater role over the coming years. Once the regime deploys more advanced nuclear weapons and ballistic missiles, it might be tempted to pursue a revisionist agenda focusing either on the reunification of the Korean peninsula or on more limited aims. In support of such ambitions, Pyongyang may develop a theory of victory relying on the threat of nuclear escalation to deter enemies from pursuing regime change and to compel them to accede to its demands. As North Korea’s capabilities mature, the United States, South Korea, and Japan will need to articulate a comprehensive approach to deterring Pyongyang while managing their differences to respond to North Korea’s behavior during peacetime, crisis, and conflict. To deter Pyongyang, coordination is key, hence the need for the United States and its allies to adopt a layered deterrence strategy and determine courses of action that, if pursued vigorously and carefully, would increase their chances of containing a nuclear-armed North Korea and avoiding nuclear war.